The NFL vs. The National Anthem: The “Middle Ground” Policy and its Impact 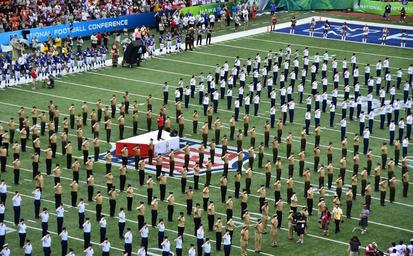 On May 23rd, the NFL owners unanimously agreed upon and issued a policy on what its players are required to do during the National Anthem. During the singing of the Anthem, all players who are on the field are required to stand for the duration of the song. The players also have the option not to stand for the anthem, but if they take that option they have to stay behind in the locker room. Also, any team, player or team personnel subjects themselves to a potential fine or punishment not just from the NFL, but from the team, if they stand or kneel on the field and show any disrespect for the National Anthem. What is key about this is that the NFL has a policy in time for the upcoming season removing all uncertainty, and that all NFL owners (except the San Francisco 49ers owner who abstained from the vote) agreed to this policy.

Overall, it appears that the NFL is trying to reach a middle ground. They could have just outlawed anyone who wanted to work for the league from protesting during the Anthem, but they chose not to do this. It appears one of their primary concerns was making sure that NFL players and personnel do not seem to be disrespectful of our country, or unpatriotic. On the other hand, if a team member has an issue he wants to protest, he can either stay behind in the locker room or find other ways to protest within the community or otherwise. The Players’ Association is undoubtedly going to be looking at this policy (as they were not consulted) and certain players have already scrutinized the policy as being unfair. One thing is certain, the policy does bring closure on the anthem issue heading into the 2018 season.

Ultimately, whether teams, players, and personnel agree or disagree with the policy, they voluntarily work for the NFL and if they want to continue to so do, they will have to abide by the rules. I am hoping that this will force teams and players to do is become more active in their respective communities, on social media, and in children’s lives. This policy should make teams want to be more proactive off the field year round on social issues such as opposing police brutality, supporting social and racial equality, and helping children and families who are less fortunate. Off the field action might actually be where it counts.

Hopefully the NFL has opened the door on motivating teams and its players and personnel to be more proactive and vocal now more than ever off the field on issues that matter. NFL players are an elite few that our youth and communities look up to, and they should build on this momentum and do what they can to set an example across the country.